A plan to transform the Maine Mall just won an award, but can it be done?

The 90-acre, mostly paved shopping mecca in South Portland would be infused with homes and parks for a more balanced live-work-play environment.

SOUTH PORTLAND — An award-winning plan calls for transforming the 90-acre Maine Mall property into a village center, with the addition of housing, a street grid and outdoor recreational spaces.

Built 50 years ago on former farmland, the mall would remain the centerpiece of Maine’s largest retail area, but the underused parking lots that surround it would become a neighborhood where people could live and play, as well as work.

The concept plan recognizes the challenges facing malls across America, threatened by a rise in online shopping that has only intensified in recent months because of the coronavirus pandemic. It also responds to the push for environmental sustainability and the desire many people have to live and enjoy the outdoors closer to work.

“People want livable, walkable communities,” said Assistant City Manager Joshua Reny. “That’s the direction we’re heading. The city has limited control over what happens at the mall. We need to be thinking smartly about future zoning and policy decisions to see things develop in a positive way there.” 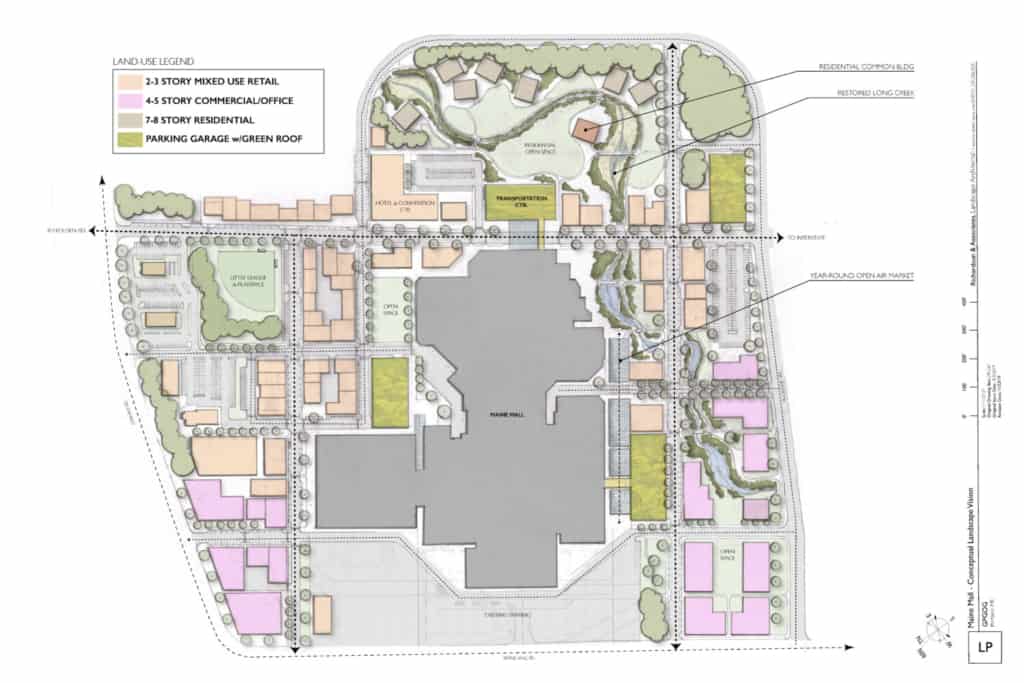 The Maine Mall Transit Oriented District Concept Plan was produced for the city by the Greater Portland Council of Governments with a $20,000 federal grant. It aims to reduce suburban sprawl and traffic congestion with mixed-use development that would increase the livability and use of public transit in the shopping area just off the Maine Turnpike and Interstate 295.

It follows similar ongoing mixed-use developments in Greater Portland, such as The Downs in Scarborough and Rock Row in Westbrook, as well as South Portland’s Mill Creek Master Plan and zoning changes that form a blueprint to transform the city’s downtown shopping area into a mixed-use village center.

The plan for the Maine Mall drew little fanfare when it was presented to the City Council in April, at the start of the pandemic. Last month, it won the 2020 Plan of the Year award from the Northern New England Chapter of the American Planning Association. The award recognizes the plan’s overall quality, public participation, clarity of steps to implement and usefulness to others.

“The plan is meant to be a conversation starter,” said Rick Harbison, GPCOG’s senior planner. “The mall is always going to be a regional center and a convenient location. This is laying the groundwork for what the city wants to become.”

The city has made recent zoning changes that paved the way for ongoing housing construction in the mall area, including at Sable Oaks, Clark’s Pond and Redbank/Brick Hill. But there’s still no housing at the mall or other elements that make up a neighborhood, Harbison said.

The plan identifies the mall’s sprawling and often mostly empty surface parking areas as an opportunity for infill development, including smaller buildings for retail, office, medical and educational uses, multi-unit housing and open spaces that would create a more attractive and livable village center.

Tex Haeuser, the city’s longtime planning director who retired in March, sought GPCOG’s assistance in reimagining the Maine Mall. He now works as a planning consultant.

“The plan shows the possibility of what a transformation of the larger mall property could be,” Haeuser said. “It also shows that possibility to the mall owners and hopefully gets them thinking about a new strategic direction for this property given the rise of e-retail.”

Some of the suggested improvements could be funded by a Transit-Oriented Tax Increment Financing District, which the city created in 2010 to capture 25 percent of new property taxes from 15 properties across South Portland. The money can be used for operating and capital costs associated with projects that improve transit access.

The plan was produced with Richardson & Associates Landscape Architects in Saco and followed repeated meetings with various stakeholders, including Craig Gorris, the mall’s senior general manager.

Gorris said the mall’s owner, New York City-based Brookfield Properties, is continuously analyzing and identifying the highest and best uses of the property to ensure optimal outcomes for its tenants, business partners and the community.

“(The plan) was a collaboration of several different governmental agencies that reimagined the mall in the context of the next 10 to 20 years,” Gorris said in a written statement. “This process has been a valuable aid to our team as we envision the future of Maine Mall.”

The shopping mecca has already diversified its tenancy after losing several large stores in recent years. In July, Jordan’s Furniture took over an anchor space that was occupied by a Bon-Ton department store from 2013 to 2017 and by Filene’s until 2006.

Round 1 Bowling and Amusement recently opened in the former Sports Authority space. And while Sears, another anchor store, closed in September, more than 100 other purveyors remain, including Best Buy, Macy’s and J.C. Penney.

Brookfield also owns the North Point Mall in Alpharetta, Georgia, an Atlanta suburb where in 2019 the city council approved a mixed-use redevelopment plan for a former Sears department store, Harbison said. The 24,000-square-foot project calls for more than 300 apartments, a bike-friendly system similar to Atlanta’s Beltline, a fountain inspired by Centennial Olympic Park and greenspace intended to create a “live, work and play” experience.

The plan for the Maine Mall shows a new main street that would bisect the property and connect Gorham Road to Philbrook Avenue near the turnpike access road. The main street would run past J.C. Penney and the proposed transportation center.

The plan also shows a hotel and convention center, an open air market, a ball field, several parks and open spaces, and a restored section of Long Creek’s South Branch wending its way through the neighborhood.

The plan suggests a variety of planning and zoning initiatives the city should take to help make it a reality. The plan is expected to be incorporated into the city’s comprehensive plan in the coming months. Exactly when and how the plan takes effect remains to be seen.

“It’s a long-term vision,” Josh Reny said. “Hopefully we get there over time.”